Data + Curiosity: How to Train Your Robot with Brandon Rohrer 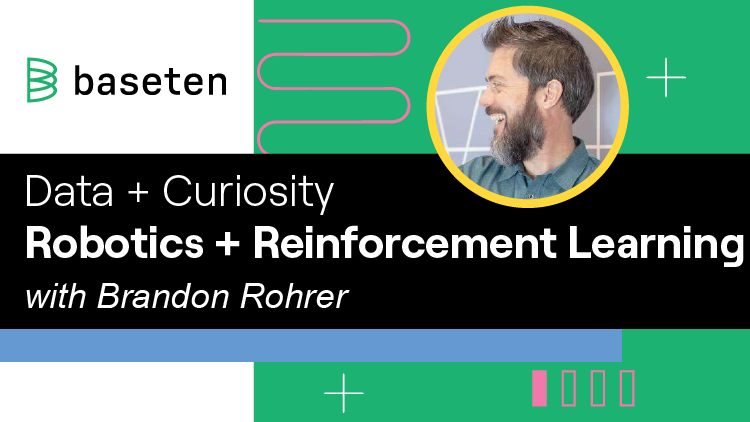 If you’ve ever ventured into the world of learning (more) about machine learning, you’ve likely come across the work of Brandon Rohrer. Brandon is an accomplished data scientist and a prolific content creator who cuts through the hype in order to make machine learning accessible to everyone.

In this episode of Data + Curiosity, Baseten Developer Advocate Jesse Mostipak talks with Brandon Rohrer about creating a robot smarter than his dog (named Reign of Terror), his new book, How to Train Your Robot, and how to give robots a bit of personality.

This post is an excerpt from the full interview and has been edited for length and clarity, but you can watch the full video below!

You seem to always be working on something interesting – what are you currently inspired by?

And so I actually at the moment, I have this long term professional hobby, which is to make a robot that's as smart as my pup. And so I forget about AGI. Dogs are way smarter than robots right now.

And so I actually at the moment, I have this long term professional hobby, which is to make a robot that's as smart as my pup.

That's a very high bar. And so I've been playing with approaches and algorithms and tools and trying things out for 20 years. And it's fun. It's extremely satisfying. I'm my own CEO and PM and everything else, which I love, and then I also love explaining it.

I noticed that on your website there are several chapters of your book, How to Train Your Robot, available. Could you tell us more about that?

BRANDON ROHRER:  My youngest is a senior in high school. He's taking computer classes, and he has his eye on possibly a computer science program this fall and in college. He's taking an artificial intelligence class, and I'm thinking, “well, all this stuff, this coding, artificial intelligence, robotics, all of this stuff. We don't have to make it as complicated as it is.”

Like there is a way to explain it so that my senior in high school can totally absorb it and understand what's going on and be excited about it. We don't have to do this gatekeeping, you know, notation and big words and all this stuff. The form of the project right now is a book, but I'm doing it in little mini-chapters, each one centered on a single focus.

…this coding, artificial intelligence, robotics, all of this stuff. We don't have to make it as complicated as it is.

I'm finishing up chapter three right now, which is just on getting one Python process to talk to another to share some things, like a very granular, specific part. But in my mind, there's this ordered progression through the whole story, and by drilling through and not skipping any steps I can make something and be really happy trying to make it accessible.

How does conveying personality come into robotics?

One is that a reinforcement learning algorithm is always living by trial and error, kind of figuring out how things work. Once you've been able to achieve your goal a few times, you have a choice.

I can stick with what's always worked or I can try something else. It might work better. I might get double the reward, or I might get bit, I don't know. There's a gamble or I can play it safe. So that's the exploitation-exploration trade-off, the amount of how you trade this off and when you choose to do one or the other, totally art.

Right now, it's like a bunch of researchers said, “Well, we've tried different things. We've adjusted the number this way in that we've added this trick and that trick, and some work better for some problems than others.” That's kind of like a personality knob.

I've got a restaurant that I like, why would I go to another one? This is a solved problem.

I think about people that I know and some are like, “Hey, I've got a restaurant that I like, why would I go to another one? This is a solved problem.” And there's others that are like, “There are so many foods that I will never taste – life is short. I need to taste something different every day.”

Whether you'd eat at the same restaurant every day, or prefer to try something new as often as you can, we’d love to hear your thoughts on this interview, how you’re enjoying Brandon’s book, and what you’re curious about! Let us know in the video comments – we can’t wait to hear from you!